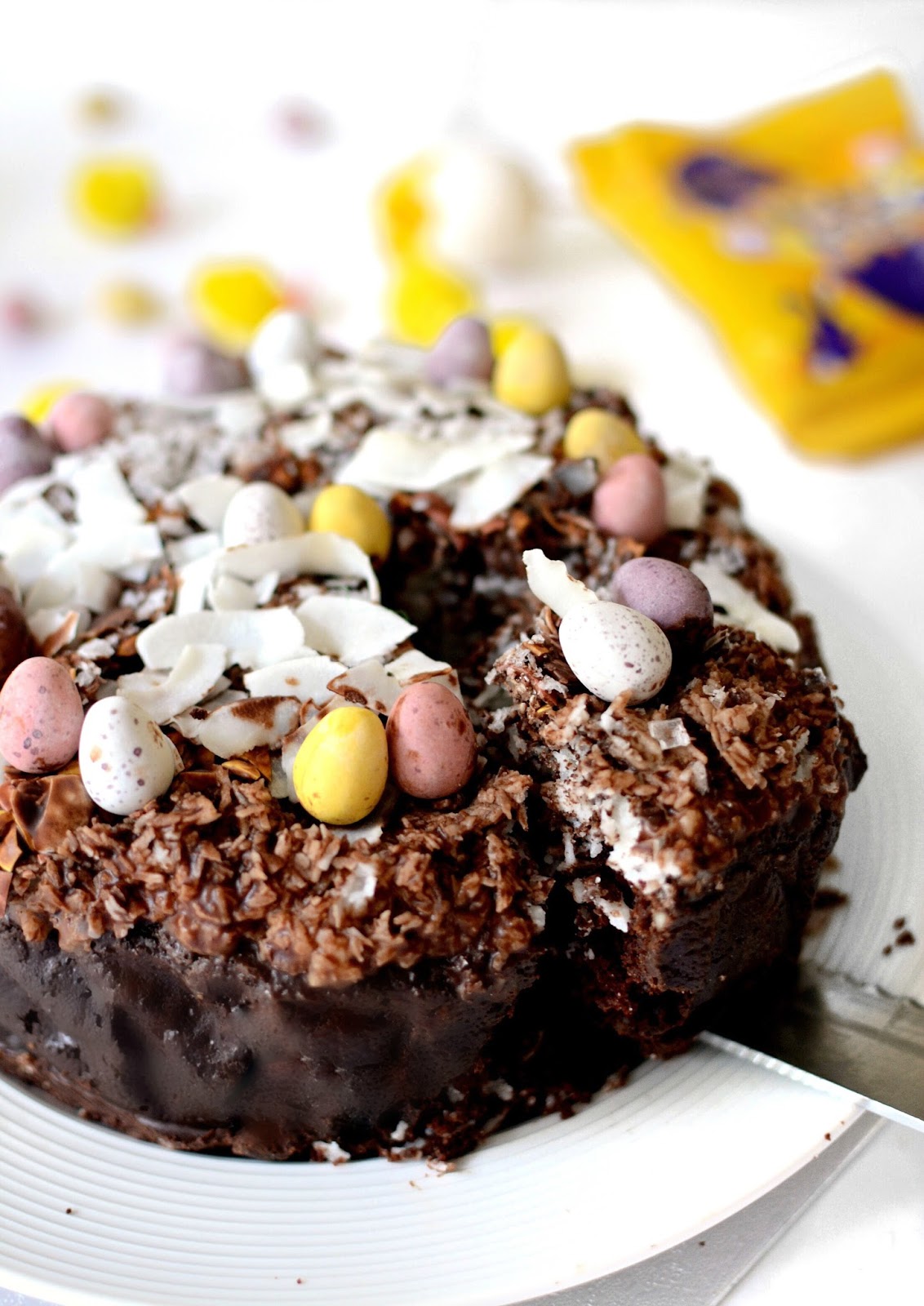 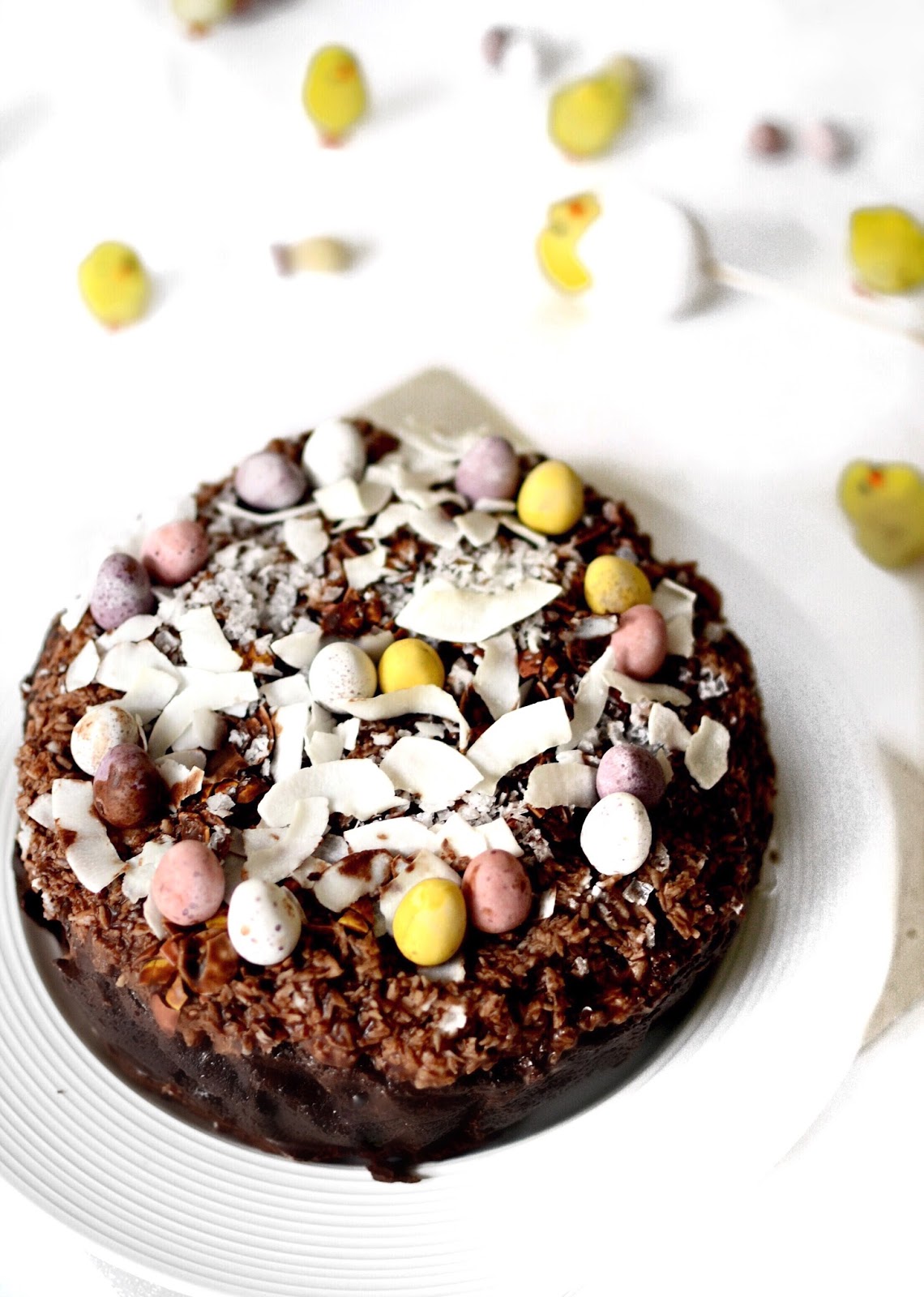 Hello dear strangers and a happy Easter Friday! Hooray for bank holidays, four day weekends, and not forgetting the resurrection of Jesus Christ, for enabling a carefree few days running on nothing but sugar and hope for sunshine. I’ve been absent on the little ol’ blog for a while and there’s nobody else to blame but myself and my unpredictably ailing body. However, one thing that has been keeping me occupied amongst my rubbish health is baking – a skill I’ve been practicing and perfecting to a standard even I’m proud of.

If you can’t bake at Easter, then when can you bake? I’ve been mastering up a storm in the kitchen, lately. From the first and best batch of Creme Egg Brownies I’ve ever made to a step forward with this; a full cake topped with so much confection you could roll out the house like Augustus Gloop in the chocolate river. I don’t know anyone on earth who doesn’t like Mini Eggs (if you’re out there then come forward because I seriously need to question your motives!). I can certainly get through a whole bag without even realising until I reach the end and it seems the same goes for most people as the supermarkets run low in their masses. This year I thought why not put the delectable shells to better use and incorporate them into another favourite ingredient of mine: coconut. I know it’s not to everyone’s taste but the combination of sweet coconut smothered in a mix of milk and dark chocolate is super tasty and different from your ordinary. Initially I was going to make a small torte but I thought why not go for the full blown cake instead because hey, a thicker slice is never going to be complained about. It’s a simple recipe that can be made in any time period of stashing Mini Eggs in your cupboards but especially during the bank holiday when you can entertain the kids, keep yourself busy and deplete your leftover goodies. Enjoy! 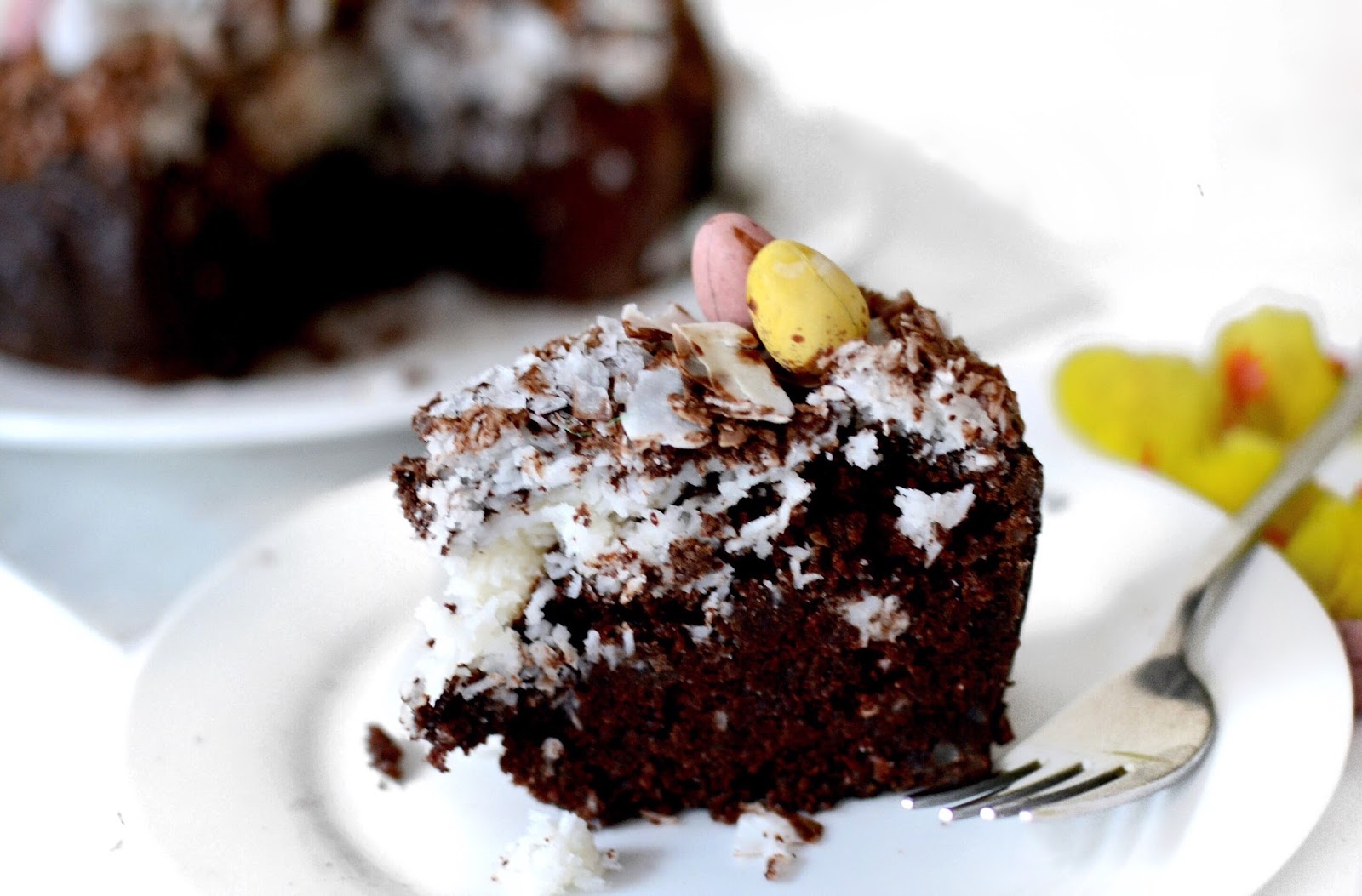 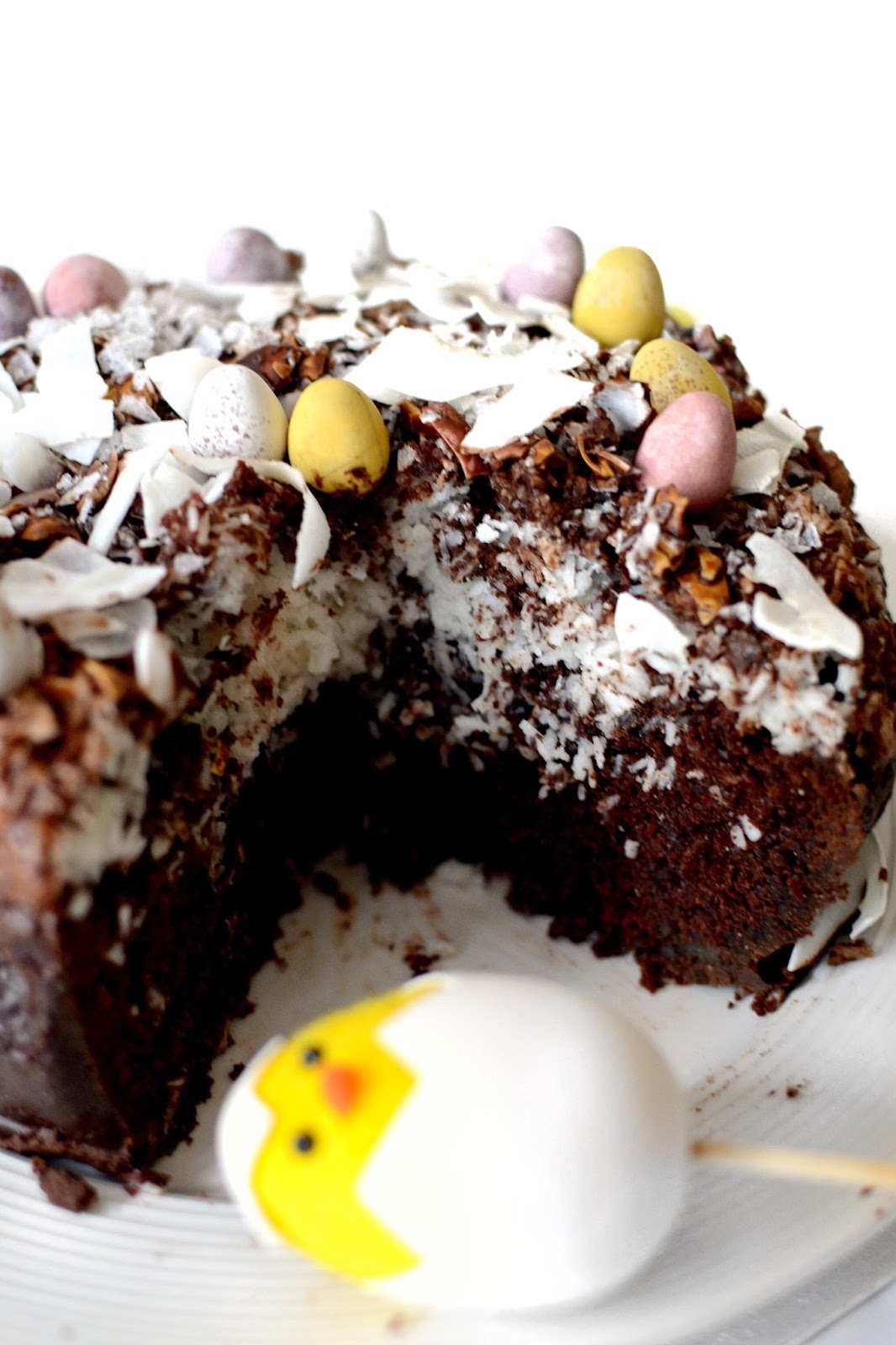 Step One | Preheat your oven to 180 degrees, grease and line base and sides of cake tin with baking paper.

Step Three | Whilst the liquid is cooling, generously beat the sugar, coconut oil and eggs in the medium mixing bowl. Whisk for a good few minutes until completely smooth and thickened.

Step Four | Blend macadamia, bicarbonate, baking powder and salt in a bowl and add the melted mini eggs once stirred thoroughly – leave out macadamia if you choose not to use nuts.

Step Five | Combine the cocoa mixture and egg mixture together whilst gently whisking, add in the almond mixture along with the 150g of flour and fold the entire batter until fully fused. Spoon batter into the prepared tin and bake for approx 45 minutes until a crust has formed around the edging but the cake is still slightly wobbly in the centre. Once ready, take the the cake base from the tin and leave to stand for 10 minutes.

Step Six | Whilst airing, make the coconut layer. Stir the caster sugar, coconut and separated egg whites together. Once a mushy texture is formed and the cake is lukewarm, spread over top of chocolate cake.

Step Seven | Make glaze. Melt the dark chocolate, mini eggs and coconut oil in a heatproof bowl over a saucepan of boiling water making sure the base doesn’t touch the water. Stir until velvety smooth (the remaining shell should be the only solid substance). Remove from heat and leave to stand and cool down.

Step Eight | Place cake on a wire rack over a sheet of baking paper laid underneath. Pour the chocolate gaze over the cake, spreading from top to sides with a spatula until covered completely. This will most likely be a messy job but the paper should hold the excess. By now the top layer should appear crispy and crunchy; add the preferred toppings (mini eggs, coconut flakes, and the last remains of the shredded coconut sprinkled evenly) and then chill the cake until the glaze sets.

And you’re done! This satisfying treat should last a few days when kept in an airtight container (if you haven’t polished off the deliciousness by then) and this size cake should serve around eight depending on how you’d like to cut the slices so there’s plenty to go around. Let me know if you try this for yourself and show off your own creations! 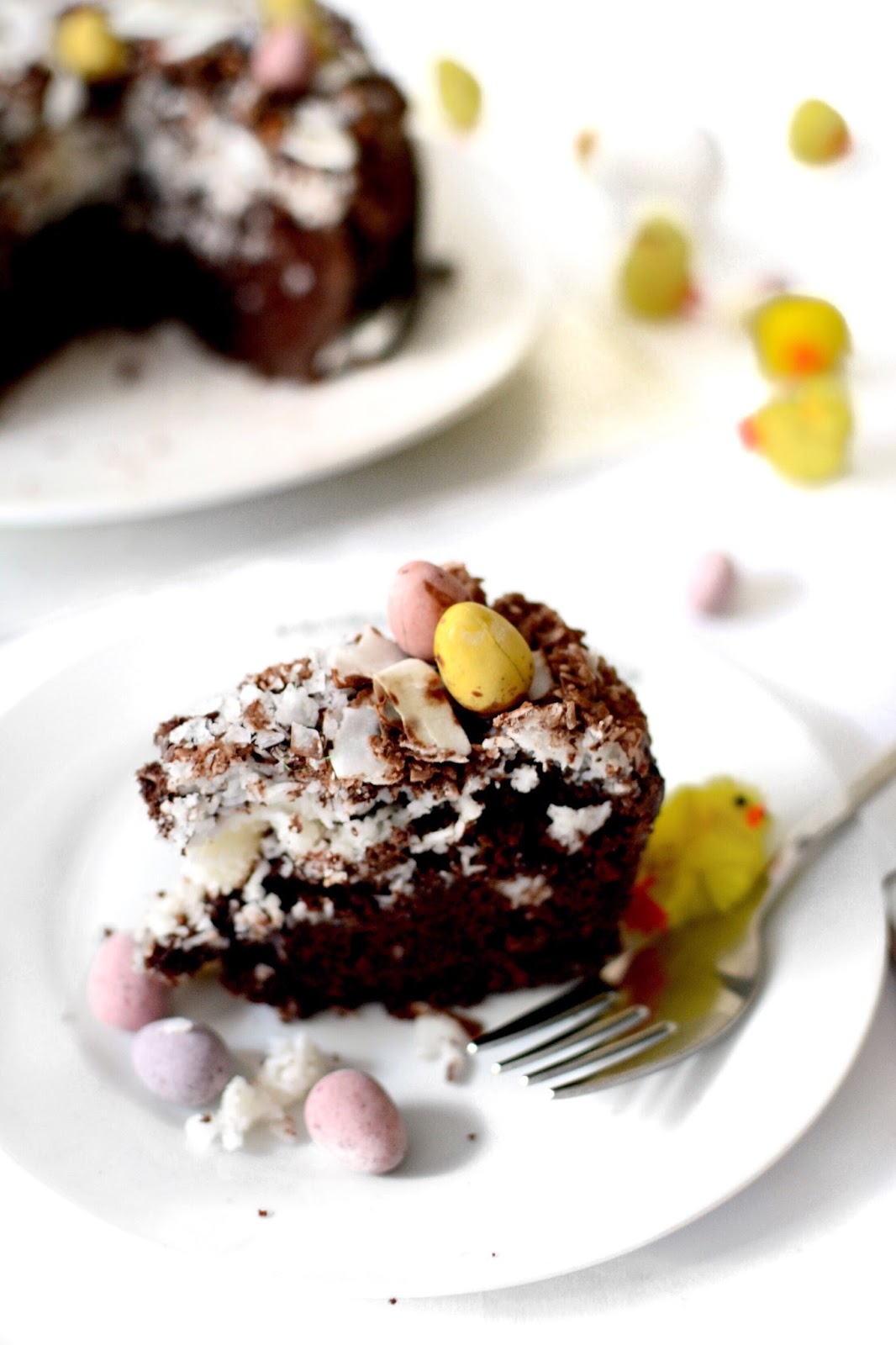 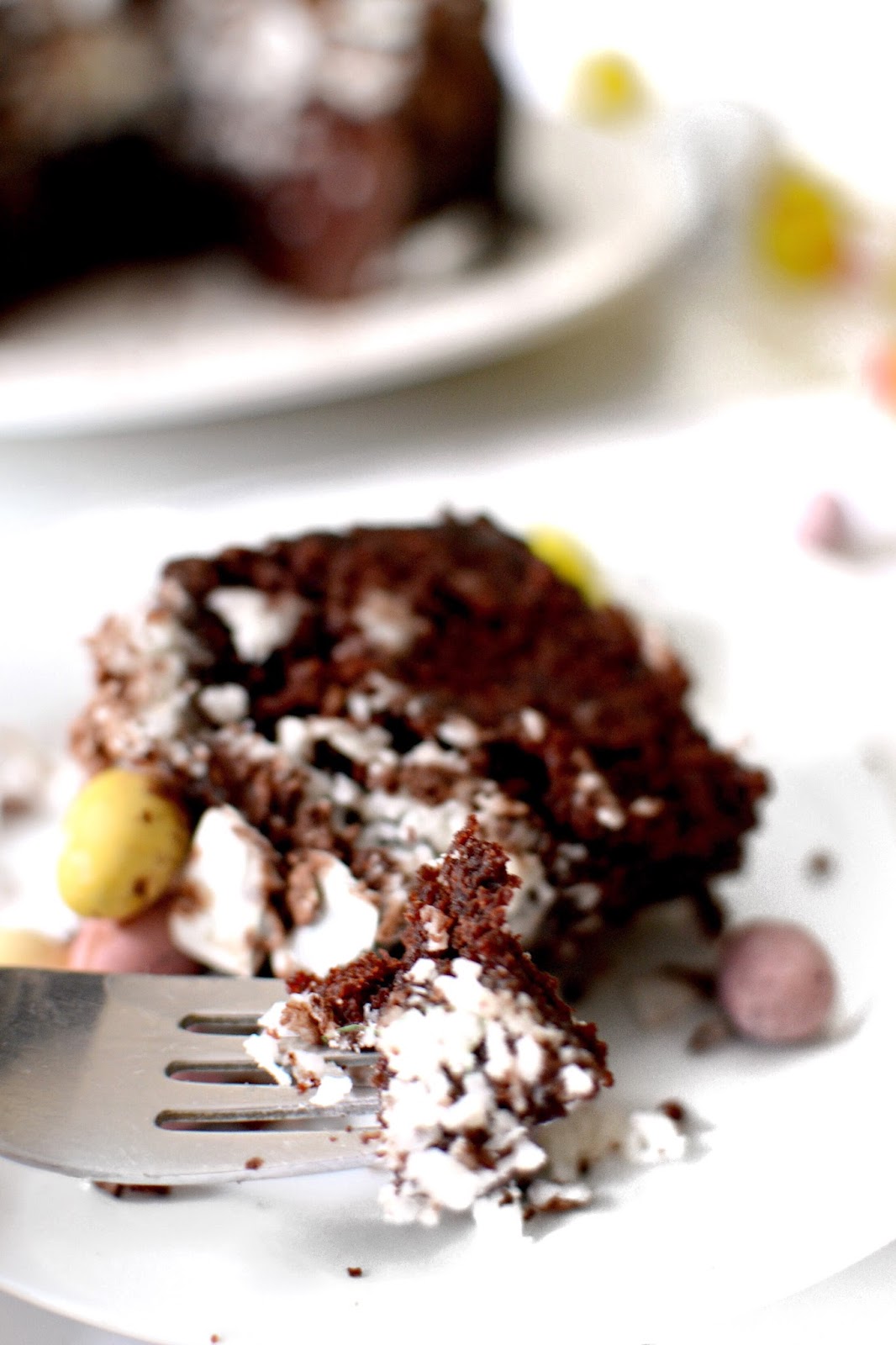 How To Pack and Prepare Your Summer Holiday Outfits

Tips For Taking Small Steps Back Into Fitness

Life: a day out to York