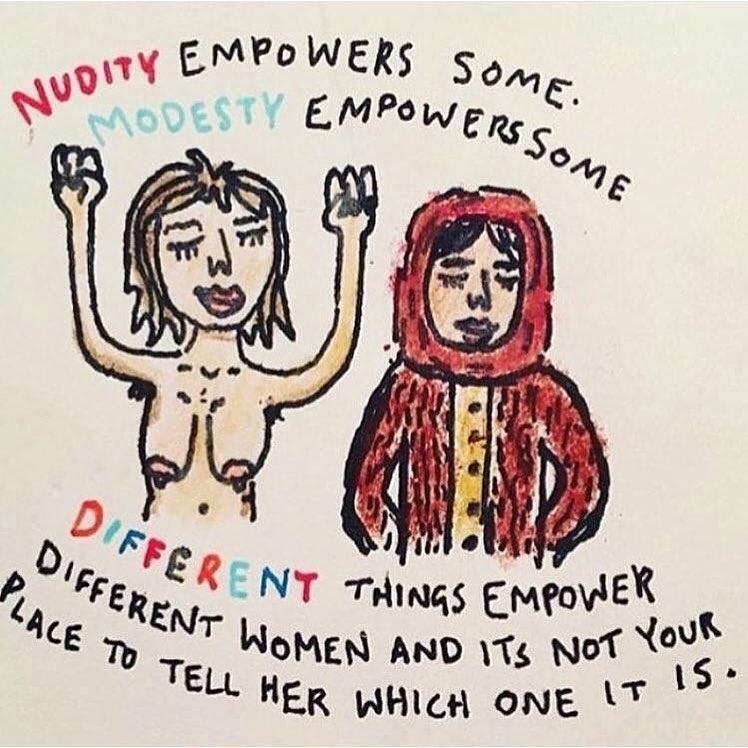 Tell me this, is there a straight answer to a simple yet elevated question? I personally don’t think so. I think there’s so many layers to this taboo subject, and so many misunderstood ones at that. The online world went wild when Kim Kardashian posted not one but two photos of her rawly exposed body and of course in true internet frenzy style, there were some awfully harsh, interrogating comments and outdated attitudes to brush past the point of what could have been a strong and powerful message. Ironically, the most objectifying of hurtled insults spouted from middle aged men and women of the same era and status which in a sense can do more damage than good but the mere fact the topic of nudity sparks such interest proves a valid point.

In today’s days and age – an obsessive culture in narrowing a woman’s confidence and courage – why shouldn’t we love ourselves? It shows we shall not be defeated. There is no rule book, and we shouldn’t have to succumb to a gender barrier, either. As women, we’re constantly told everything about us is morally wrong. Too fat, too thin, too introverted, too extroverted, too shallow, too vain. Some high almighty men think it’s okay to lecture us on what part of us should be covered, attempt to silence us and deny the right to exploring and identifying our inner spirit whilst still believing our bodies are single handedly open to be used as sexual objects. It’s accepted for a man to strip naked without fuss but hath a woman do the same and hell breaks loose. Whether fact or figure, this scenario happens on a regular basis as we go about our everyday lives which is why supporting a woman’s choices and freedom to equality is key to importance.

That is exactly what it is, a personal choice. What works for some might not work for others and that’s absolutely fine. Allowing a woman to gain control of herself is empowering alone. Although I’m not the slightest bit fussed with Kim K or the latest involved model – I feel so strongly about declaring and embracing the nature of our bodies and fully honour the side to intimacy that attempts to stray away from the sexual attribute and focuses on the core value of power. Nudity is one of the most real aspects of life. Standing in transparent glory with your own figure in view is beautifully dynamic. I, personally, wouldn’t be as confronting with my bare modesty because that’s how I feel and you know what? I most definitely won’t judge you, shame you or tell you what’s right or wrong. Instead I praise you (possibly even positively envy you) and only wish to continue to build my self-assurance to a level I’m happy with.

The degrading cruelty that fellow women display to each other never fails to surprise me. Although the subject is poignant and unfortunately controversy can’t be avoided, I’m often puzzled as to why so many people are offended by what other people choose to do with their bodies. Who are we to tell somebody what to do with something that is theirs? Human anatomy included. We should be willing to help women reclaim their space within an area that takes time to switch from vulnerability to being fully in charge of power. Stripping a woman of her prerogatives (no pun intended) is without a doubt contributing towards the policing of women’s bodies. We owe no excuse or apology to anyone. In many cases, when a woman chooses to empower herself it’s not to parade for others, it’s to accept and show your flaws with your head held high. When Kim K hit back at the critics she provided a great argument – “I am a bad role model for being proud of my body”. It’s sad that we consider someone a bad person for seeing light in their self – in fact, it’s quite dangerous for the future generation to base their ideas on this false misinterpretation and it means we’re teaching the incorrect lesson. In my eyes, as the saying goes, if you’ve got it, flaunt it!

Whether you feel more comfortable exposing your hidden parts or sheathing in head to toe fabric, it’s all unique to every woman. There is no simple representative image, it’s all a learning process as you grow to make that decision for yourself. None of the autonomic choices are better than the other, it’s the notion of how glorious one feels in her own skin. You have to ask yourself this; what’s right for me? What do I believe in? What do I want? Don’t let society stop you from making that individual settlement. It’s all about understanding how you feel. What’s yours is yours alone and you hold the authority to decide what is beautiful and righteous. If one day I reach a point where I’m compelling enough to release a supposed private and sacred element, then I will go ahead and do so and I won’t let an idiot like Piers Morgan tell me otherwise.

Five A Day Advice and Recipes

How To Make The Most Of Christmas Markets

The Seven Common Myths and Misconceptions of Chronic Illness