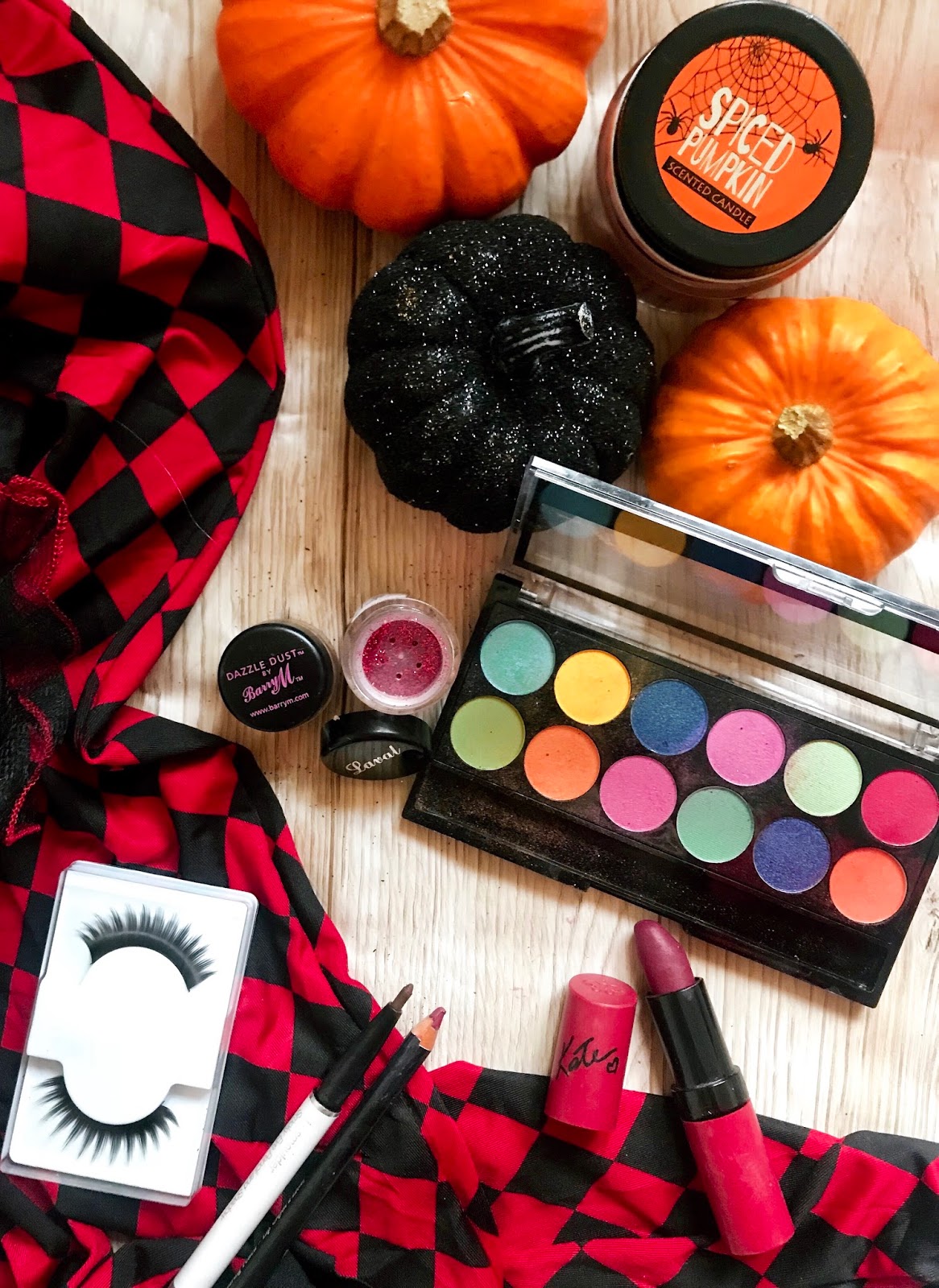 Happy Halloween, folks! I’m well aware for some it’s just the October finale and another day trying to adjust to the clock change, the 5pm moon rise and the drastic drop in temperature but for me it’s my favourite time of the year; a real opportunity to release my inner child, to spend unnecessary money on tacky novelty accessories, to gorge on too many sweets, carve pumpkins (badly), sit in watching classic horrors with candles burning and Thriller playing, take advantage of the dark, eery, breaching cosy atmosphere, and most of all get creative with fancy dress and play about with Halloween makeup – both new and old. 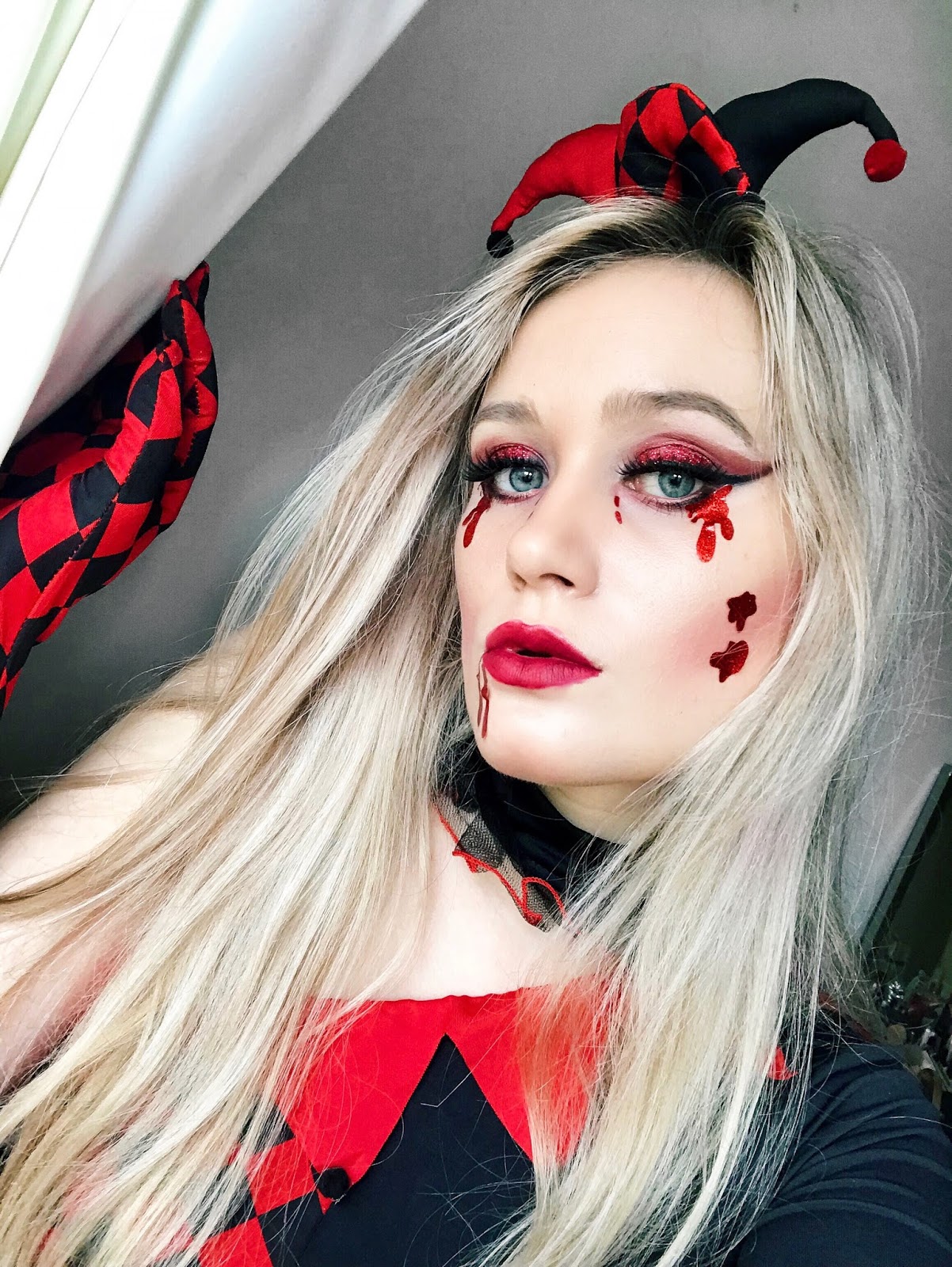 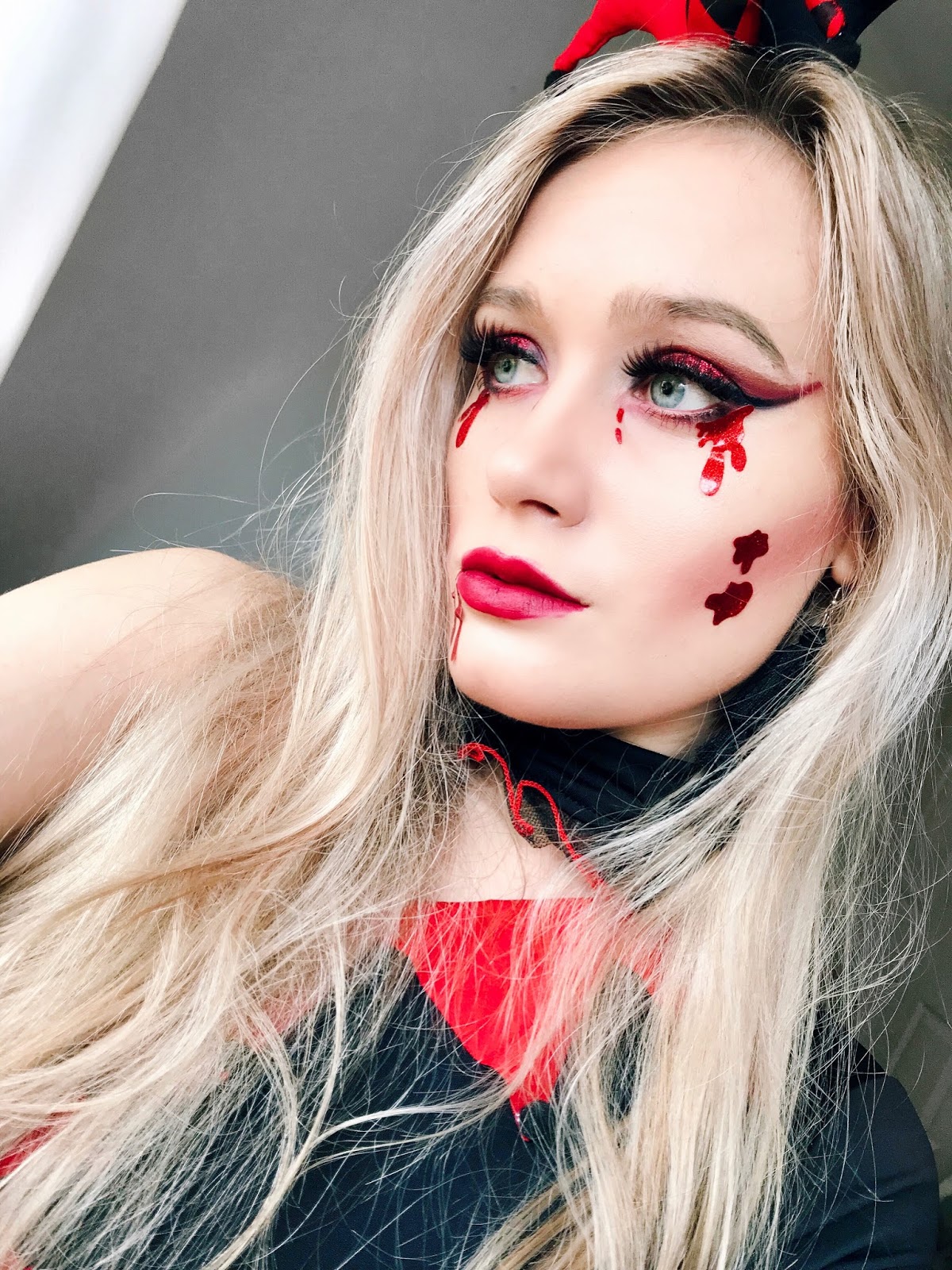 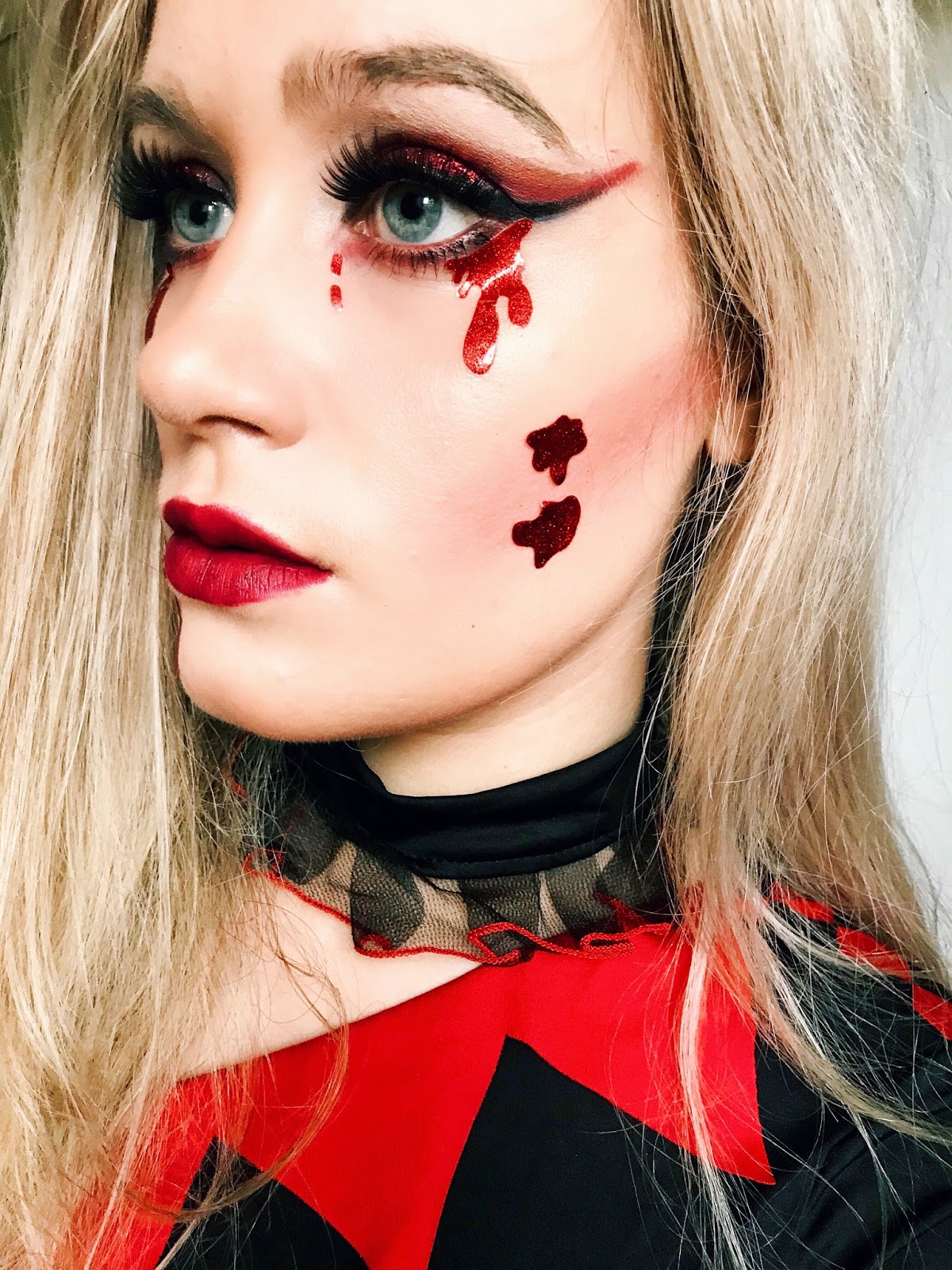 This year I debouched from the ordinary and headed off on a long weekend away with the family which not only turned out to be a relaxing, restorative break but also allowed me to actually transform my everyday face into something spooktacular (okay, not entirely, more glam with a hint of gore which tends to be my go to theme). I’ve not dressed up or commemorated the supernatural season in style for years – instead staying at home with only my mum for company, but a party in the local bar where the entire caravan camp had the opportunity to go all out was the perfect excuse to swap my gladrags for a planned out costume.

With the request from my 13 year old cousin who puts me to shame with her skills, I was a Jesterina Clown – she was the white version and I was the red. I wasn’t about to put up a fight at this request because a red hued makeup look always tends to be the stand out colour for my features and when it’s Halloween there’s always room to be a little more dramatic and not get judged for it. There’s something about a full face that makes me ooze with confidence – the  more glitter and bolder the colour, the better. 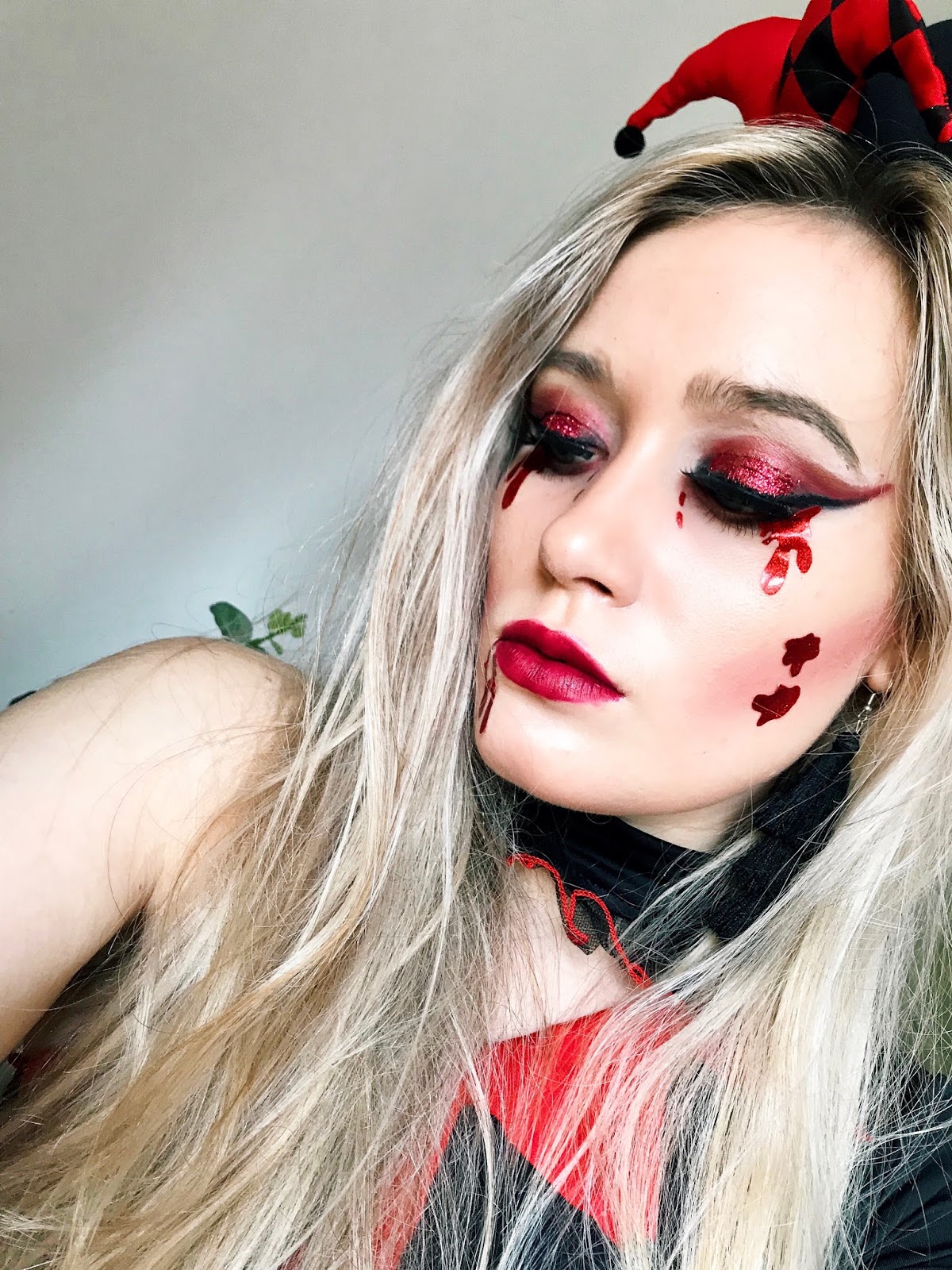 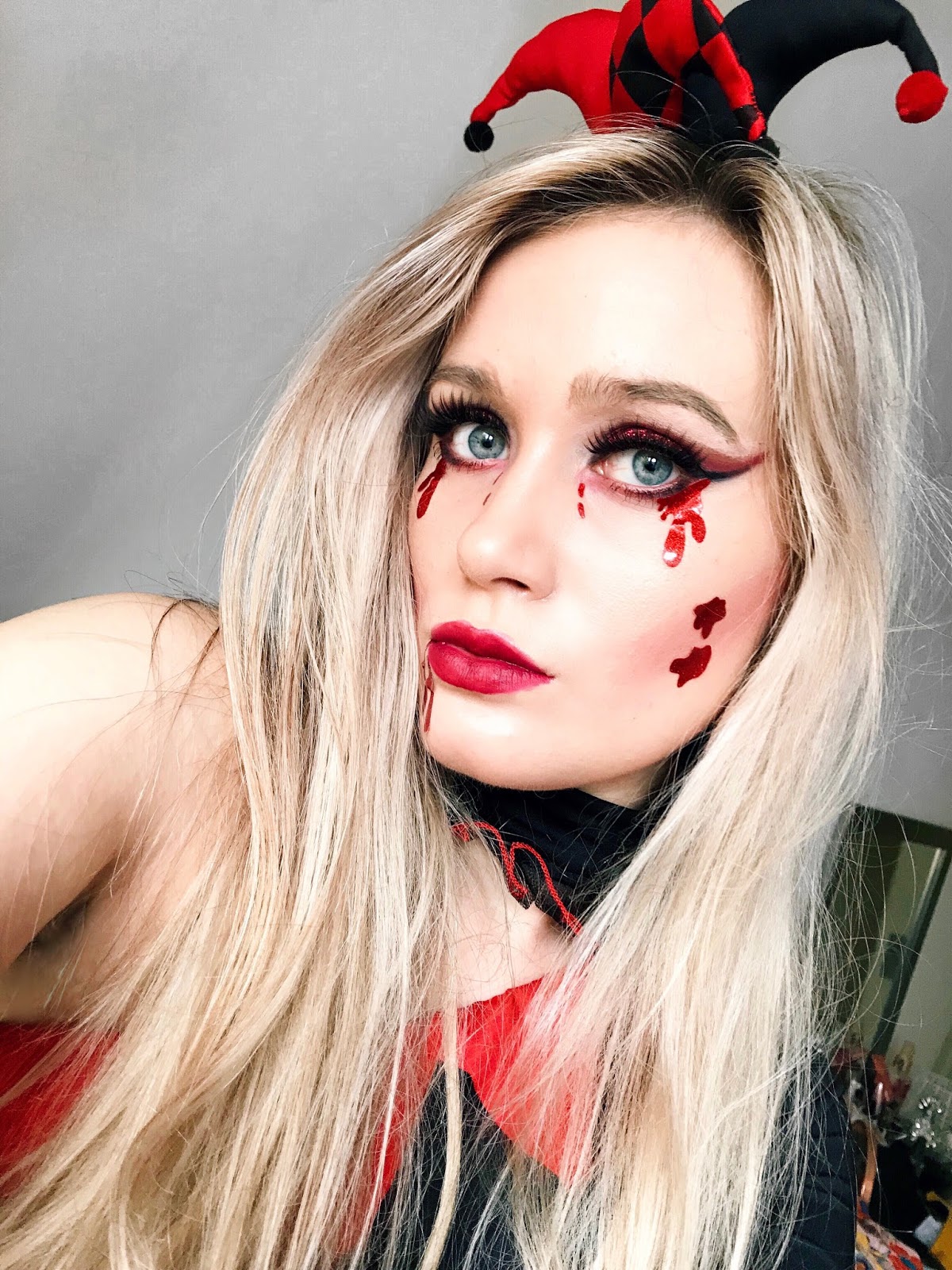 My final Halloween makeup masterpiece was formed on a whim, based on me rooting through my makeup drawers and appointing my most useful and appropriate cosmetics. I knew I desired the blood dripping appearance for added effect courtesy of the infamous Poundland stickers so I worked around that idea as a cornerstone. The focus was on my eyes so I went for bright reds with a hint of smokey brown tones. There wasn’t a specific guideline or a tutorial I followed, it was just me exploring and experimenting with what I had and surprisingly designing a final formation I was egotistically proud of. Which leads me on to explaining just how I got there.

First up (after moisturiser and primer) I covered my face in the palest base I could find in my collection which was the Jane Iredale Glow Time BB Cream in shade BB1. This has always been a highly rated product on my list with its silky smooth flawless finish and heavy coverage but I put it to one side when moving on to foundations more natural to my skin tone. I was thankful for the rediscovery as it made the ideal alternative to the bright white ghostly complexion that is typical of Halloween makeup and did the trick in minutes. I finished off my face with my usual Maybelline Colour Correcting Palette for under the eyes and the contour of the cheeks, Rimmel Concealer for any spots and blemishes and a combination of both the Bobbi Brown Sheer Pressed Powder and Nars Light Reflecting Powder brushed lightly for that illuminating appearance. 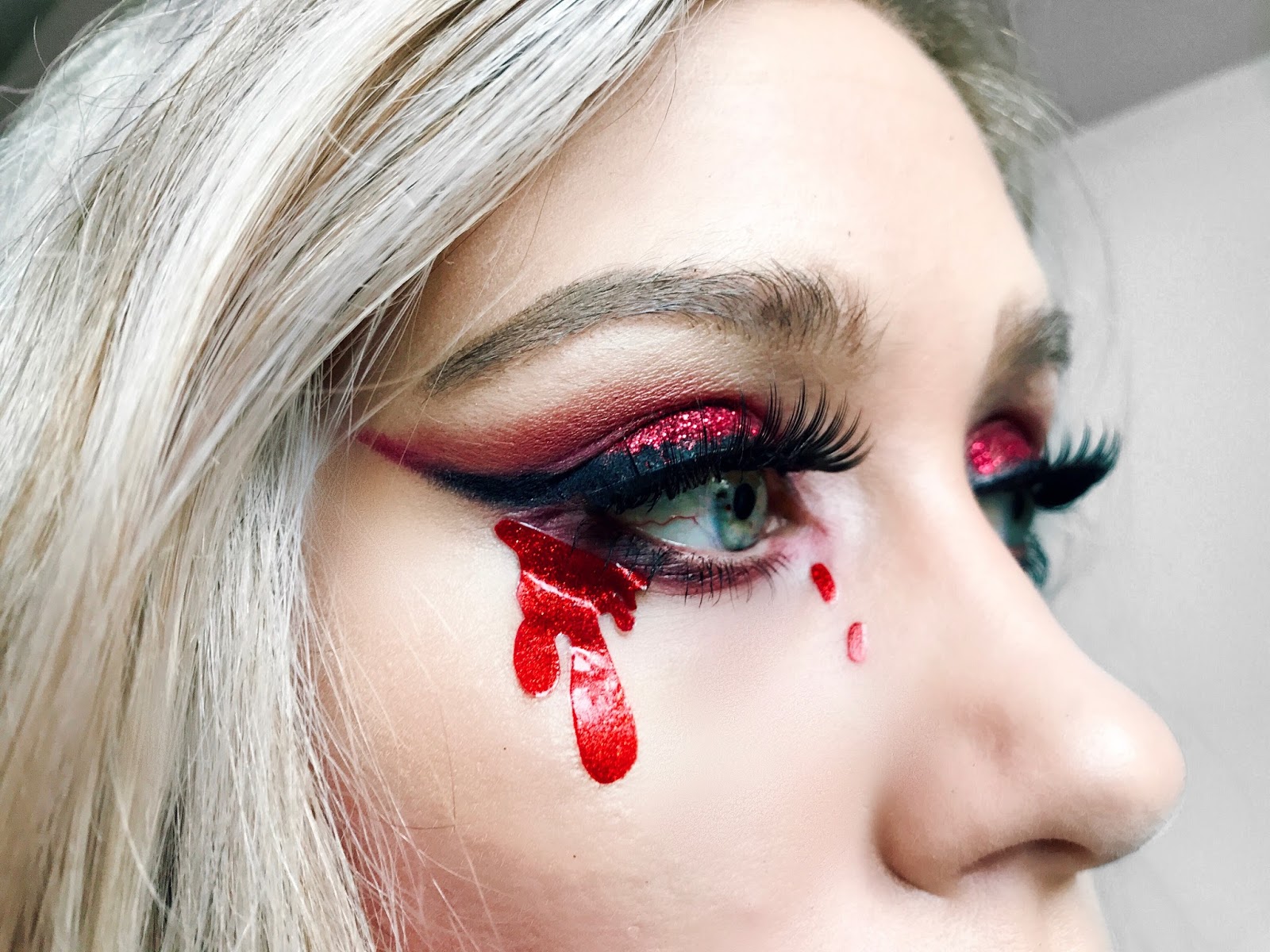 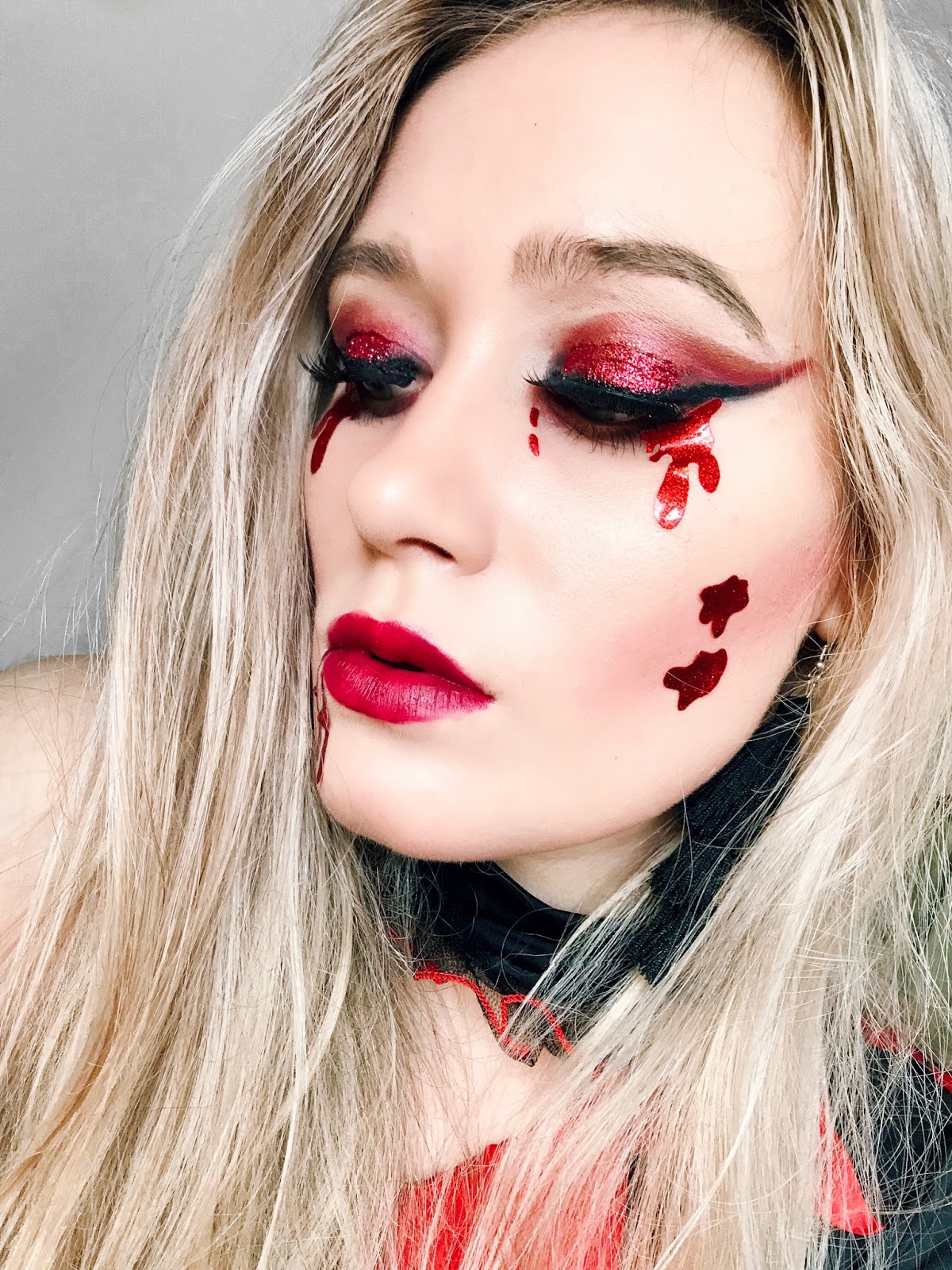 Before I lead further into the radiance side with my highlighting touches, I moved on to the eyes as I knew this is the part I needed to concentrate on and ultimately nail before anything else could be continued. To say I had no idea what direction I’d take it in… thankfully it was a success on the first try!

I started off by lining the very top off my crease from the corner of my eye all the way to my temple with the Illamasqua Pencil in Lust – reaching a high point with a flick. It is a lip pencil but it worked just as well as a multi purpose on the eyes and didn’t smudge whatsoever! I also traced over this with the New Cosmetics Smokey Eye Pencil to add some smouldering precision to the density. Further on from this, I used the shimmery red shade third from bottom in the Morphe Fall Into Frost Palette to add some extra definition blended outwards to just below the brow bone, meeting with the aligned pencil. 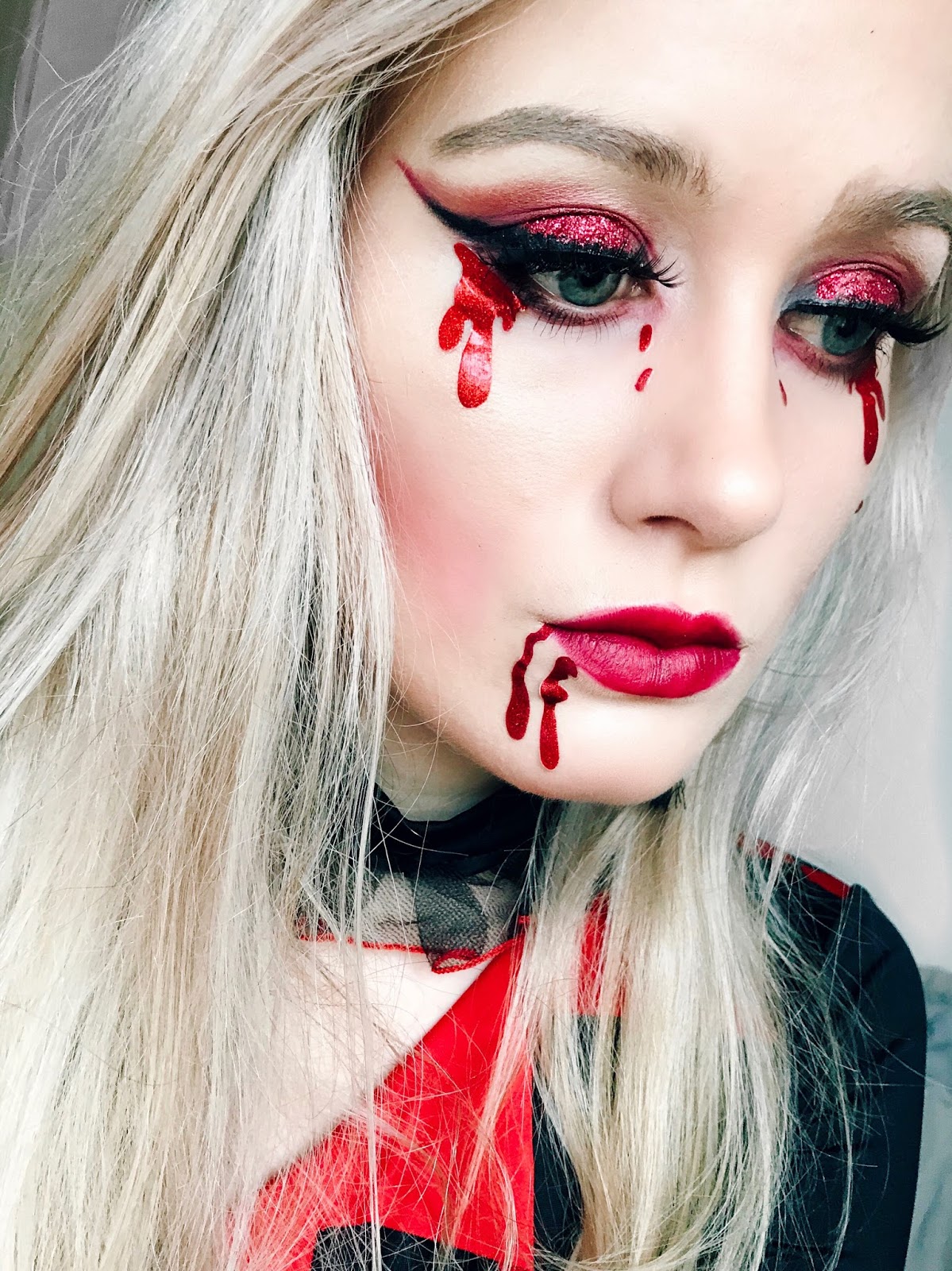 With the top half of my eye now done, it was time to move on to the centre of the lid in which I smothered with ELF’s Shadow Lock Primer to provide an under base and to taper out any unwanted overdrawn patches. Then I followed on with the vivid red shade in the MUA’s Silent Disco Eye Palette covering the middle leaving room for both the outer corner and inner corner to be deepened with a dark solid black (once again from the Morphe palette). Once this was completed it was heading on to the messy part! Layering the already applied red, I dabbed a sweep of the Barry M Dazzle Dust in Nemesis with a fluffy, dampened brush and fused out carefully aiming to stay away from the black. Then with some eyelash adhesive which I find is the only thing that holds glitter, I used the same brush to speckle some Laval until entirely coated, repeated the first steps of eyeshadow for underneath my eye and then finished off with my Maybelline Gel Eyeliner with the wing evening out parallel with the red. Falsies were a must for a showy visage and the Primark dramatics gave me the desired result for just £1!

The MUA palette came in handy for adapting to the cheekbones in place of my usual golden bronze contour. I used a beauty blender and the red shade to sculpt my under structure and highlighted above, on the nose, around my jawline and on my brow bone with my holy grail Topshop Glow and Illamasqua Highlight. For brows I used the NYX Eyebrow Gel in Blonde and for lips I stuck to a lipstick I never get bored of – the Kate 107, producing that real vampy, gothic image. 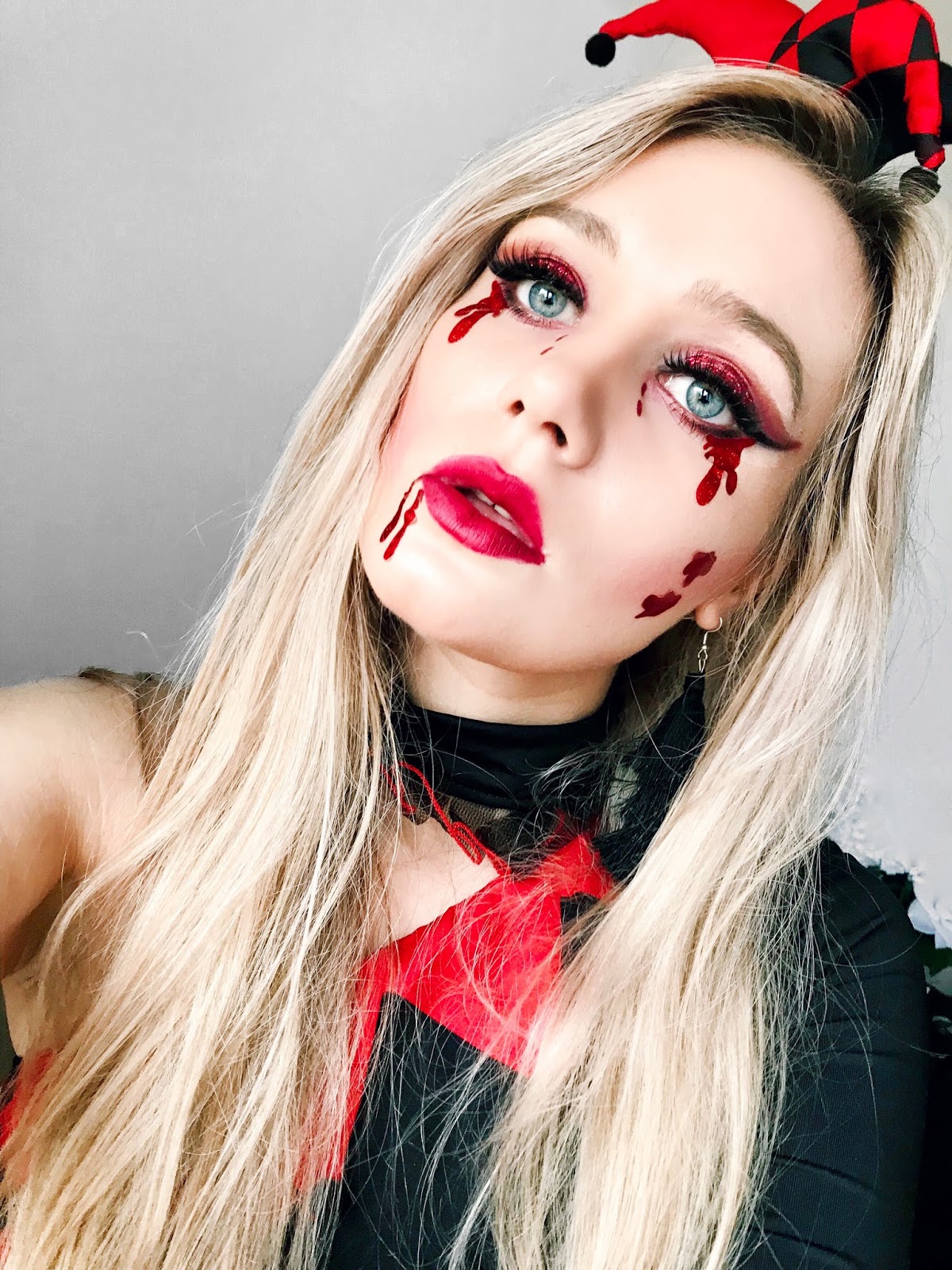 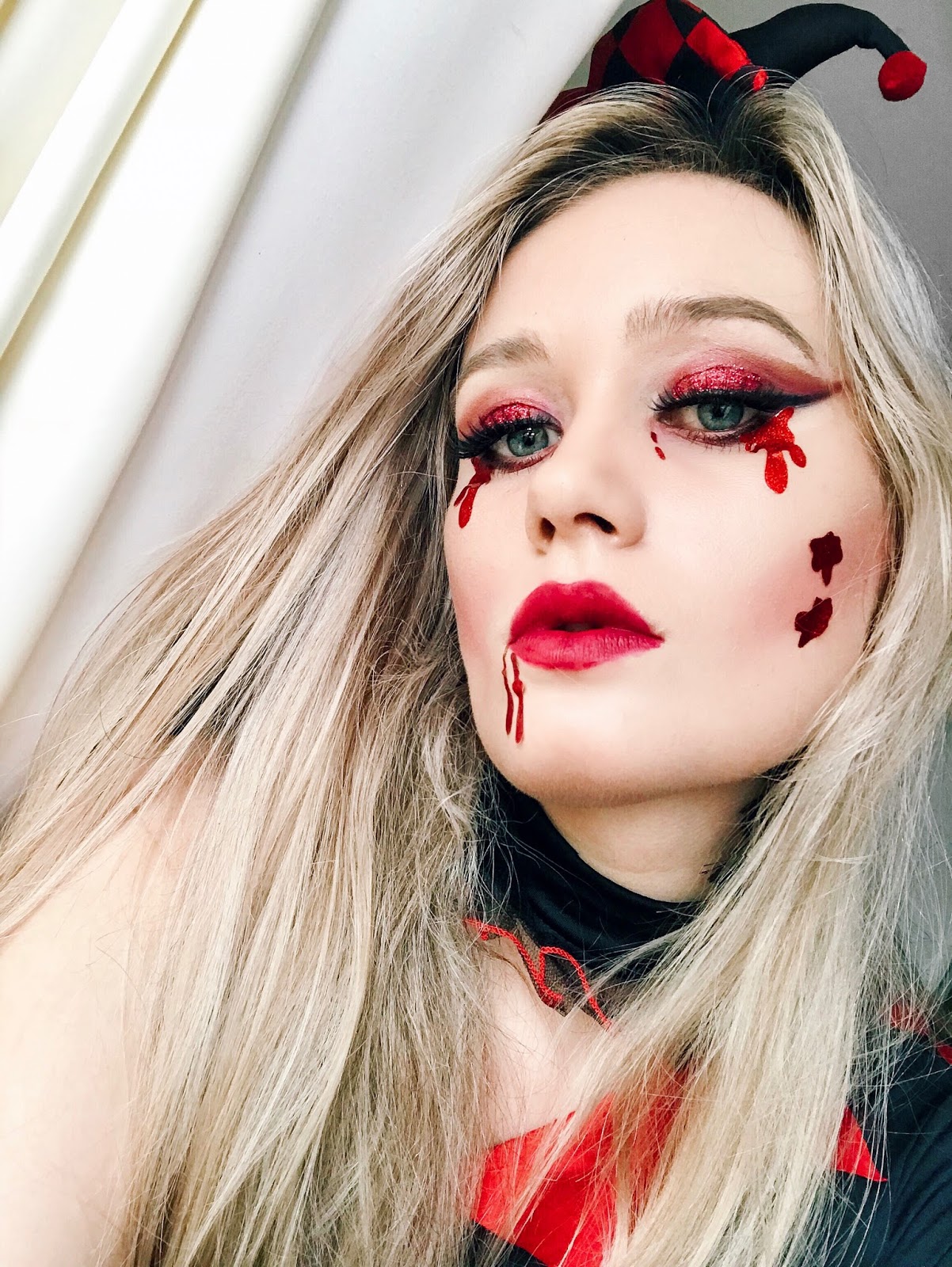 I know the whole idea of Halloween is to represent scary but as society progresses it’s also a justification to embrace your inner diva. That’s exactly how I perceived myself and I definitely made the most of feeling pretty damn hot!

Have you been occupied and dolled up for the Halloween festival or is ‘once 31st October is over it’s acceptable to play Christmas songs on repeat’ more your approach?

Giving The Gift Of Lush This Christmas

What I got for Christmas: twenty fifteen

Return Of The Mac